The Psychology of Longevity

The following is a snippet from ARPF’s Brain Longevity Therapy Training. For those who feel they have no power against developing Alzheimer’s disease… boy, do we have news for you.

Our Shared Heritage of Connection

Our evolutionary heritage provides the neural mechanisms that mediate the behavioral and psychological features that govern everything from the challenges of birth itself, to the stress of everyday life, and the ultimate triumphs in balancing late life. It is our social connections with one another that have allowed for us to reduce psychological and physical distance, to champion cooperation and connection in the great journey we call survival.

These social connections– our bonds– are in fact the greatest determinants of our health in late life. For over a quarter of a century’s worth of social science research, we have seen ample evidence that social connections play a critical role in mitigating the effects of life’s most stressful experiences. Therefore, many leading gero-psychological researchers have suggested that the greatest intervention we can create to help combat geriatric psychological illness are interventions that humanize our social relations. These interventions are ones that help change from a self-centered organism to a social being, able and willing to form and sustain meaningful social relationships.

What we believe behavioral science has taught us this far is that the path towards restorative health and away from deteriorative processes is a combination of both biology and health behaviors that help mitigate stress and contribute to psychological well-being.

Dementia is an umbrella term that has been used to denote many conditions whose symptoms include relative loss of cognitive function compared to previous brain function, one or more specific cognitive impairments, and a severe enough cognitive loss to affect key areas of daily life such as work or social interactions. Alzheimer’s disease is the most common form of dementia, with a prevalence ranging from about 4% for those under the age of 65 to about 38% of those over age 85 years. Current theories suggest that Alzheimer’s disease arises from the misprocessing of amyloid beta (Aβ) that generates plaque formation, which is neurotoxic. “Mesial temporal and frontal brain regions are especially sensitive, producing the earliest neurofibrillary tangle accumulations. This anatomical specificity helps explain the early episodic and semantic memory deficits and executive dysfunction observed in AD before, during, and after MCI.”

There is little evidence to suggest that pharmacological approaches to prevention of dementia are effective. The actual utilization of non-pharmacological interventions in dementia care falls short of its potential. “The commonly used alternative intervention of psychoactive medication is reimbursed, and the underlining structure for its delivery, such as physicians, medicine aids, pharmacies, and monitoring and quality control systems is largely in place.” This is the standard of care in geriatric psychiatry. “In contrast, the provision of non-pharmacological interventions generally is not reimbursed, and a system for providing these interventions often is absent.”

One such non-pharmacological intervention is called brain training, or cognitive training for older adults. The extent to which cognitive training can make a difference as a neuroprotective or compensatory method for better functioning currently is being explored, but according to recent studies, cognitively stimulating activities along with seven other factors account for a 10% to 25% reduction in the incidents of Alzheimer’s disease. Overall, cognitive training appears to show some benefit for cognitively impaired older adults, although all forms of training show some impact, training which targets working memory appears to achieve the best results.

Take the Steps to Prevention

Want to learn more about the Integrative Medical Approaches to AD? From a psychological perspective, practices and interventions that focus upon restorative processes can help promote optimal and resilient aging. Let’s help you get the brain health you deserve. Join our groundbreaking program to help yourself, your family, and any clients who could benefit from a greater, healthier mind. 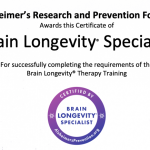 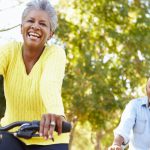