The ARPF is excited to share with you our groundbreaking meditation and memory research. Since the year 2000, we have completed many studies examining the effects on brain and memory of a very special 12 minute yoga meditation called Kirtan Kriya.

Our work has been conducted at some of the leading medical schools in America including the University of Pennsylvania, and UCLA. One of our studies, which will be described below also involved the University of California-San Francisco, where Dr. Khalsa, our medical director, did his anesthesiology residency.

All of our research has been published in prestigious medical journals. 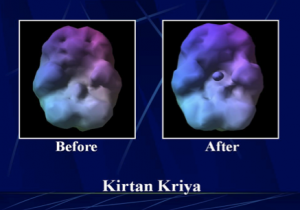 Currently, we are funding new studies, including the largest study in history on the prevention of Alzheimer’s disease. We are also supporting research at the University of West Virginia and UCLA on the effects of Kirtan Kriya in patients with MCI. MCI may progress to Alzheimer’s.

As time goes on, we plan to design and fund more research about preventing Alzheimer’s disease. Among them, we will study the powerful effects this simple yoga meditation has on your overall health, your brain and your memory.

What we have discovered thus far is that simply practicing Kirtan Kriya for only 12 minutes a day has profound effects on not only your brain and memory but also on your mood, energy, genes, cells, immune system, sleep, your overall health and psychological and spiritual well-being.

Moreover, as you will read below, doing this meditative exercise in the prescribed manner increases the blood flow and oxygen to critically important areas of your brain. This, in turn, activates areas that determine your health and well being, as well as your ability to age well. In fact, one of the studies reveals that people who practice meditation on a regular basis enjoy an anti-aging effect on their brain.

Perhaps most significantly, this technique activates the same area of the brain that goes down in function when a person actually loses their memory. This area has an anatomical name, the posterior cingulate gyrus, but you can simply think of it as a muscle like your bicep. Not unlike when you go to the gym and exercise for your bicep to make your arm stronger, when you exercise your mental muscle with Kirtan Kriya you strengthen your mind and memory. Moreover, our research has revealed a reversal of memory loss (published in the Journal of Alzheimer’s Disease).

We have also discovered that highly stressed people, such as caregivers of dementia patients, are able to reduce their stress and actually improve the health of their genes by doing this exercise 12 minutes a day. Scientifically speaking, they have longer telomeres, the tip of your DNA, and when your telomeres are longer, you are healthier and longer lived.

Below you will find a more complete description of the ARPF’s research and a link to the actual published abstracts. You may claim your copy of Kirtan Kriya at the end of this section.

Here is a chronological list of our studies along with supporting information, such as user-friendly pictures of brain scans and where they were published. We hope you enjoy these descriptions.

What’s New In Our Research?

We are delighted to announce that the ARPF has partnered with the Ministry of Health and Welfare in Helsinki, Finland and The Karolinska Institute in Stockholm, Sweden, for the largest study in history on the prevention of Alzheimer’s. Called the FINGER Study, it will involve over 1,000 subjects.

The participants will be involved in an integrative medical program not unlike the original ARPF’s Four Pillars of Prevention®. They are: diet, exercise, mental exercise and social activity, and management of metabolic and vascular risk factors.

Additionally, telomere length will also be measured before, during, and after the study. This aspect of the FINGER Study is called: Changes in Telomere Length And Cognitive Impairment During Multidomain Lifestyle Intervention. This portion of the study is entirely funded by the Alzheimer’s Research and Prevention Foundation.

This research will continue The ARPF’s involvement in pioneering research. Research on the association between cognitive decline and telomere length is virtually nonexistent and there are no longitudinal studies on this topic. The aim of this project is to assess the correlates of telomere length among 60- to 77-year-old individuals who follow a prevention program and to discover if longer telomere length or changes in telomere length during the 2-year program are associated with better memory and Alzheimer’s prevention.

Read a more complete listing of the ARPF’s research and find links to the actual published abstracts.