Plaques, Tangles and Your Memory

A new study in the American Journal of Geriatric Psychiatry establishes a connection between lifestyle factors (like physical fitness and diet) and the presence of key neural indicators of Alzheimer’s. This research has exciting implications for ARPF’s work, and supports our belief that the way you live and work is just as important to your brain health as your genes.

So what exactly is so interesting about this new study? To understand that, let’s go a little deeper into two of the changes that Alzheimer’s produces in the brain – changes that doctors can use to detect the disease, and that also directly contribute to the degradation of neurons that causes so much harm. These two changes are “plaques” and “tangles.”

Plaques are formed when beta-amyloid proteins begin to clump together. Beta-amyloids are produced in the brain naturally, but a healthy brain is able to break them down before they build up and cause problems. Alzheimer’s causes these proteins to persist, and “to form hard, insoluble plaques.” The plaques, along with other fragments of beta-amyloids, impede neural communication by preventing neurons from signaling to each other at synapses. They may have other ill effects, like causing the immune system to break down disabled cells. We still don’t know the full effects of plaques.

Tangles occur when tau proteins, normally an important part of the system that transports nutrients across different parts of neurons, start to break down. When the transport pathways stop working correctly, neurons suffer from lack of nutrients, and can ultimately die off. Looking for tangles using a powerful microscope helps doctors determine if someone has Alzheimer’s.

“The fact that we could detect this influence of lifestyle at a molecular level before the beginning of serious memory problems surprised us,” said Dr. David Merrill, the lead author on the new UCLA study. “The study reinforces the importance of living a healthy life to prevent Alzheimer’s, even before the development of clinically significant dementia. This work lends key insight not only into the ability of patients to prevent Alzheimer’s disease, but also physicians’ ability to detect and image these changes.”

Learn more about your ARPF’s 4 Pillars of Alzheimer’s Prevention, our science-backed method for taking control of your own brain health. You can also find more information about the research we support here.

Cucumbers: Refreshing and Great for Your MemoryGeneral 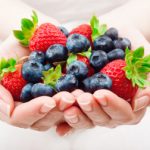